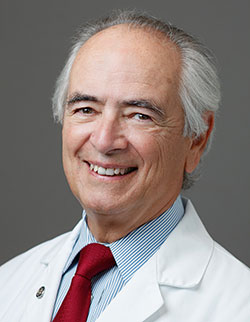 As a Senior Scientist in the HSS Research Division, Dr. Bockman has directed basic and clinical research under NIH-sponsored grants and has published over 100 articles in many scientific and clinical journals, including Science, Journal of Clinical Investigation, Journal of Bone and Mineral Research, and Endocrinology.

Dr. Bockman is a Fellow of the American Society for Bone and Mineral Research (ASBMR-where he has served on the Professional Practice Committee and as the Society’s representative to FASEB ), and a Member of Endocrine Society (where he served on the Clinical Endocrine Update steering committee and Ethics Committee). He is a Fellow of the American College of Physicians, was elected to the American Society for Clinical Investigation and served six years on the editorial board of The Journal of Clinical Endocrinology and Metabolism and four years on an FDA advisory Committee and 3 years as a Director for the Advances in Mineral Metabolism Meeting, a mentoring venue for the ASBMR Haddad Fellows. Locally, Dr. Bockman serves on the Executive Committee of the NIH sponsored Endocrine Fellowship Committee at Weill Cornell and served many years on the Scientific Advisory Panel for the NIH funded Weill Cornell Clinical Translational Science Center and as the Vice Chair of the HSS Institutional Review Board.

The major objective of Dr. Bockman’s clinical and research efforts has been to elucidate the pathogenesis and genetic basis of metabolic bone diseases, including osteoporosis, and to develop new therapies for treating these disorders for the purpose of improving medical and surgical outcomes for HSS patients.

Dr. Bockman’s recent research has focused on clinical questions affecting the care of osteoporosis patients, including effects of specific pharmacologic therapies, and to expand our knowledge of the skeletal consequences of epidural steroids on bone metabolism. With a newly donated high-resolution peripheral CT-scanner, HSS is able to non-invasively establish the efficacy of treatment regimens within months as opposed to years with prior DXA methodologies. The team is rapidly initiating new collaborative studies with Medical and Orthopedic colleagues at HSS, NYPH and the larger NYC Medical Community. Dr. Bockman speaks for the Endocrine Service to express his profound appreciation to our patients, Donors, HSS Administration, Colleagues and Staff who have supported The Endocrine Service at HSS.

The major objective of the Dr. Bockman’s research is to elucidate the pathogenesis and genetic basis of metabolic bone diseases, including osteoporosis, and to develop new therapies for treating these diseases.

Current clinical research is being conducted through four active protocols at the Weill-Cornell Clinical Translational Science Center (CTSC) with former HSS - Endocrine Fellow, Dr. Naina Sinha (now Assistant Attending Physician at NYPH), and with former WMC-Fellow, Dr. Emily Stein. Please note that Dr. Bockman served as the mentor for Dr. Stein, who was awarded an NIH-sponsored CREFF award to carry out her research, and was the first to receive a Cornell “Masters Degree in Clinical Research” awarded through the WMC-CTSC.

In the second CTSC study, we have initiated a clinical trial examining the efficacy of two regimens to replace vitamin D in D-deficient bariatric subjects.

A fourth CTSC study studies vitamin D status in the W-CIMA patient population with regards to their response to bisphosphonate therapies.

Gallium Nitrate: Transient and stably transfected osteoblasts have been used to study the effects of gallium, a unique transitional element on the expression of specific matrix genes. Various aspects of  cell-signaling that can lead to alterations in bone-matrix gene expression have been studied. Such studies can provide the scientific rationale for the development of clinical protocols measuring the ability of gallium to prevent and treat osteoporosis.

Cell and Molecular Regulation of Collagenase Gene Expression: Cell  mediated damage to the major matrix components of connective tissues is an early and critical step in the pathogenesis of destructive arthritic diseases. Type I collagen is the major organic component of bone. In order to develop new therapeutic strategies for preserving and protecting  connective tissue, a better understanding of the cellular controls on the degradation and synthesis of the key matrix components is required.

Genetics of Osteoporosis and Fragility fractures: While it is generally acknowledged that many of the factors that determine bone strength are genetically determined, little is known about which genes determine bone strength or how those genes might be affected by epistatic interactions. Recent studies with Dr. R. Blank in a recombinant-congenic mouse model (HcB/Dem) have demonstrated quantitative trait loci (QTLs) for failure load, a measure of a bone's overall strength. Moreover, by mapping QTLs for a variety of bone phenotypes in this system, we have shown that the relevant QTLs are often pleiotropic, each affecting distinct subsets of independently measured phenotypes: diaphyseal diameter, structural stiffness, ash percentage, and body mass. The mapping data, therefore, allow prediction of the general mechanisms as well as the locations by which the identified QTLs affect bone strength.

As of March 03, 2022, Dr. Bockman reported no relationships with healthcare industry.

Dr. Bockman in the News