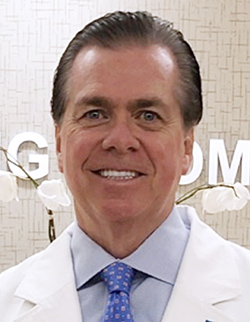 Dr. Stephen J. O’Brien is an Attending Orthopedic Surgeon at HSS and NewYork-Presbyterian Hospital. He also serves as a Professor of Clinical Orthopaedic Surgery at Weill Cornell Medical College. Dr. O’Brien specializes in orthopedic surgery and sports medicine. He received his undergraduate degree from Harvard College where he was a member of both the varsity football and varsity baseball teams. He then completed his medical degree from the University of Virginia, his internship at Yale University, and his residency at HSS. He also did his fellowship in Sports Medicine at HSS.

Since starting his practice in 1987, he has been involved in teaching, research, and team coverage for organizations such as the New York Giants, St. John’s University Athletic Department, New York Racing Association, and the New York Saints Professional Lacrosse Team. Dr. O’Brien has also taken active leadership roles on national societies such as the American Orthopaedic Society for Sports Medicine (AOSSM), where he has served on the board of directors, and the American Shoulder and Elbow Surgeons (ASES) Association, where he currently serves on the membership committee.

Dr. O’Brien has also been actively involved in research throughout his career. He has authored 24 book chapters and 117 peer-reviewed or review articles on numerous topics within sports medicine and orthopaedics. Currently, his research interests have focused on an algorithm he developed for the diagnosis and treatment of biceps-labral disorders.

Dr. O'Brien also received his MBA from Columbia University in 2000, graduating as the president of his class, and delivering his graduation class day speech.


Please do not hesitate to contact our office if you have questions regarding your insurance coverage. You may have coverage subject to the availability of 'out-of-network' benefits.

As of December 16, 2019, Dr. O'Brien reported no relationships with healthcare industry.

Dr. O'Brien in the News

Controversy exists among shoulder surgeons over the role of the labrum and biceps as pain generators in the shoulder, and there seems to be increasingly polarizing points of view. Some argue that the labrum is a common pain generator, especially in young athletes, while others contend that the labrum is not a common pain generator and is over diagnosed as such. Similarly, as some shoulder surgeons argue that the long bead of the biceps tendon is a common pain generator, others assert that it is, as well, over diagnosed, and over treated. The work Dr. O’Brien has been doing in this area over the last ten years has led him to the conclusion that there should be a paradigm shift in the way we think about this issue. He believes that the anatomy and clinical functionality of the biceps and labrum work as ONE structure, the Biceps-Labrum Complex, instead of two separate entities. Dr. O’Brien has developed a clinical testing system, called the “3-Pack” along with an arthroscopic exam which guides him in the diagnosis of a patient’s pain. He is currently validating this clinical examination testing system with arthroscopic correlations noted during surgery.

An important outcome of Dr. O’Brien’s testing has been the development of a new surgical procedure called the Biceps Transfer. Dr. O’Brien created this procedure in 2002, and has since performed over 600 biceps transfers. The procedure, designed to fill a void in orthopaedic surgery on treatment options for the long head of the biceps tendon, has been extremely successful in Dr. O’Brien’s hands.
In order to continue to better understand the idea of the biceps-labrum complex, Dr. O’Brien and his research team are actively involved in different research studies for patients who are treated for shoulder pathology under his care. Each research project aims to address a different stage of the diagnosis and treatment processes. Below is a list of projects that are currently underway: