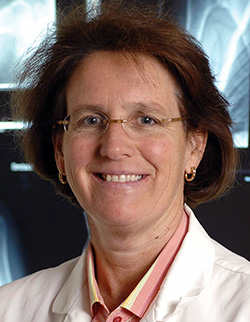 Dr. Anne Kelly is an Associate Attending Orthopedic Surgeon specializing in shoulder and knee surgery and is an Associate Professor of Clinical Orthopedic Surgery at Weill Cornell Medical College. Dr. Kelly received her undergraduate degree from Harvard College, where she was elected captain of both the Field Hockey and Basketball teams her senior year. She completed her medical degree at the State University of New York at Buffalo, graduating Magna Cum Laude in 1992. Dr. Kelly completed her internship in general surgery at Yale New Haven Hospital. She completed her residency at George Washington University Hospital in Washington DC, and was then a Sports Medicine Fellow at the University of Massachusetts Medical Center.

At HSS, Dr. Kelly currently serves as Director of Physician Wellness and the Education Director for the HSS Sports Medicine Institute. Dr. Kelly is also actively involved in medical education and served as Co-Director of the HSS Orthopaedic Residency Program and Chairman of the Orthopaedic Residency Curriculum Committee from 2015-2019. She also served as Chairman of the Medical Student Advisory Committee from 2008-2015.

Dr. Kelly served as a Board Examiner for the American Board of Orthopaedic Surgery in 2017 and 2018. She was an invited speaker at the Austrian American Seminars in Salzburg, Austria, in 2006 and 2016. Dr. Kelly was also an invited speaker at the annual meeting of the Alabama Orthopaedic Society in 2011, and was elected an Honorary Member of the Society. In June 2012, Dr. Kelly traveled to Beijing, China, where she lectured on various aspects of shoulder and knee reconstruction at the Peking University Orthopaedic Course.

Please do not hesitate to contact our office if you have questions regarding your insurance coverage. You may have coverage subject to the availability of 'out-of-network' benefits.

As of November 14, 2019, Dr. Kelly reported no relationships with healthcare industry.

Dr. Kelly in the News