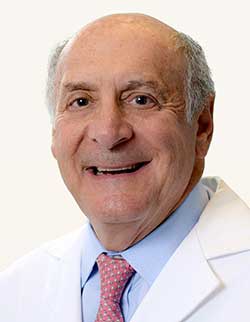 He is one of the foremost authorities on shoulder arthroplasty in the world. He has performed thousands of shoulder replacements, including live surgeries to teach other orthopedic surgeons in the U.S. and abroad. Dr. Dines is a developer of the Biomet Biomodular Total Shoulder System, one of the most popular systems used today.

Dr. Dines has extensive experience treating professional athletes. He is currently the Medical Director of the Association of Tennis Professionals (ATP Tour) and has been the U.S. Davis Cup Tennis Team Physician since 2000. He is the Medical Director for the LI Ducks Minor League Baseball team and an orthopedic consultant for the US Open Tennis Tournament. Previously he served as the Associate Team Physician for the New York Mets Baseball Team.

Academically, David Dines is a member of the Sports Medicine Institute at HSS and is a Clinical Professor of Orthopedic Surgery at Weill Cornell Medical College. Previously he served as Chairman and Professor of Orthopedic Surgery, Albert Einstein College of Medicine at Long Island Jewish Medical Center. He is very active in research, winning the Neer Award for Shoulder Research in 2004 and being nominated 3 times since.

American Board of Orthopaedic Surgery

Below are the healthcare industry relationships reported by Dr. Dines as of November 21, 2019.

Dr. Dines in the News