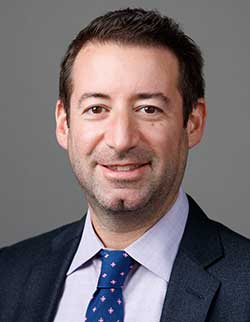 Dr. Buchalter was born in New York, NY and raised in the Riverdale neighborhood of the Bronx. He received his Bachelor of Science degree, graduating with distinction in 1999 from Cornell University. He received his MD degree from New York University in 2003. He then went on to complete his residency in Internal Medicine at Brown University in Providence, Rhode Island in 2006. Following residency, he joined The Miriam Hospital in Providence as an Attending Physician for a year before coming to Hospital for Special Surgery.

Dr. Buchalter has been involved in the medical care of surgical patients at HSS being named an Assistant Attending Physician in 2007. He has a particular interest in quality and patient outcomes and serves on several hospital peer review committees. As a practitioner of perioperative medicine, he provides medical care for patients undergoing orthopedic surgery, commencing with the preoperative visit and continuing throughout the patient’s stay.

In addition to his role as Assistant Attending Physician at HSS, he holds the title of Assistant Professor of Clinical Medicine at the Weill Cornell Medical College.

As of November 13, 2019, Dr. Buchalter reported no relationships with healthcare industry.