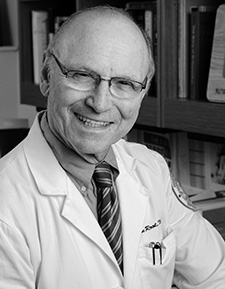 The Board of Trustees, the Medical Staff and the entire Hospital for Special Surgery community mourn the peaceful passing of our beloved colleague Dr. Leon Root in the early morning hours of September 21, 2015.

Dr. Root has been a cornerstone of HSS since joining the staff in 1967. He considered himself an orthopedic family doctor who cared for patients from childhood through their adulthood, but we recognized him as one of the nation’s foremost specialists in pediatric orthopedics. His contributions to patient care, medical education and research were extraordinary.

During his 27-year tenure as Chief of Pediatric Orthopedics at HSS, he established New York City’s first clinic for children with Osteogenesis Imperfecta, founded New York State’s first Pediatric Orthopedic Outreach Program, and expanded the Hospital’s Cerebral Palsy Clinic. Dr Root’s many other accomplishments and contributions include serving as President of the American Academy for Cerebral Palsy and Developmental Medicine, and authoring books that received wide acclaim.

We honor Dr. Root's extraordinary legacy of selfless care and character as an obligation to the communities and Hospital we serve. On behalf of the HSS Family, we extend our greatest sympathies and appreciation to Dr. Root’s wife Paula, their children Matthew and Lillian, and their four grandchildren.