Thirty-one-year-old Mandy DiMarzo of Old Greenwich has been athletic most of her life. She played soccer in college. These days her favorite activity is running. “It’s my passion, it’s what I love to do,” she says. An accomplished athlete, Mandy has participated in five marathons, placing first in Charlottesville, Va. Last year, she won a half-marathon in Westchester County. 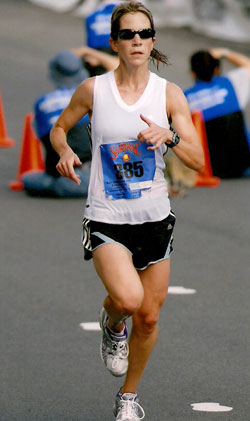 So when she suffered a stress fracture that wasn’t healing and a bone density test found her bones were becoming brittle and weak, she was thrown for a loop.

Most of us consider osteoporosis a disease of older adults, but Dr. Marci Goolsby, a sports medicine specialist in Greenwich, is seeing the warning signs in increasing numbers of young women, especially female athletes like Mandy. Bone density tests are revealing a condition called osteopenia, a precursor to osteoporosis, which causes bones to be brittle, weak and prone to fractures.

“The main problem is an ‘energy deficiency,’ which means they’re not consuming enough calories and nutrients to match the energy spent with exercise,” explains Dr. Goolsby, a non-operative sports medicine doctor at Hospital for Special Surgery Physicians Office in Old Greenwich (HSS.edu/CT). “This often takes a toll on their bones, causing stress fractures and early osteoporosis. In addition to stress fractures, another clue of an energy deficiency is a decrease in frequency or an absence of periods. This constellation of problems is known as the ‘female athlete triad.’"

When the body is in an energy-deficient state for an extended period of time, it can lead to osteoporosis at a very young age. Mandy was referred to Dr. Goolsby after the stress fracture in her thigh bone didn’t heal after a month of rest.

Dr. Goolsby will present a FREE talk on female bone
health and warning signs of a problem in athletic
young women.

The seminar is open to the public, but reservations
are requested.

“Dr. Goolsby was very thorough, she didn’t leave a stone unturned, and she was able to tell me why the stress fracture wasn’t healing,” Mandy said. It turned out that running 10 to 12 miles almost every day had taken a toll on her body. “The main thing I learned was the importance of providing fuel for my body with the right nutrients so it could perform.”

That meant an overhaul of Mandy’s diet. “I learned that my diet is my best friend, and basically, I added a lot of dairy - yogurt, milk, cottage cheese. I used to stay away from dairy and load up on carbohydrates. I also started to consume more protein and vegetables.” Mandy also takes a multivitamin, along with calcium and vitamin D, which she had never taken before.

Instead of running up to 12 miles a day, Mandy now engages in more cross training and has added swimming and yoga to her activities.

After making these changes to her diet and exercise routines, she repeated the bone density test, and her bone density was back to normal.

Dr. Goolsby says it’s critical for everyone - not only female athletes - to engage in good habits to protect one’s bones early on and maintain these practices throughout adulthood. Individuals can do a great deal to prevent osteoporosis.

Consuming a diet rich in calcium and vitamin D or taking supplements, if necessary, and engaging in regular physical activity are important for people of all ages. “Even though many people know this, it often takes a conscious effort to put it into practice. Studies show that only a very low percentage of adolescents get enough calcium,” Dr. Goolsby says.

Mandy, who coaches an eighth grade girls soccer team, wants to get the word out about the importance of good nutrition because she sees warning signs of the “female athlete triad” in her 13- and 14-year-old players. She recalls one girl who was sidelined because of repeated stress fractures. “I think there’s a major need for education in the community,” Mandy says. “Some of these young people may be going down a slippery slope. I wouldn’t want them to develop the same problem I did.”

“It’s really important to diagnose and treat the ‘female athlete triad’ early,” Dr. Goolsby says. “Ignoring it can lead to long-term problems, such as recurrent stress fractures and osteoporosis.”

As for Mandy, she says she now has more energy than ever and feels great. “I’m the best version of myself.”