In addition to its use as a diagnostic tool, ultrasound can be used therapeutically. However, in many medical circles, therapeutic ultrasound is considered an alternative for healing to be used only when traditional treatment methods fail. Hospitals across the country are beginning to use ultrasound as an auxiliary therapy tool to aid a treatment plan, particularly in orthopedic conditions following surgery or injury.

As a world leader in orthopedic surgery, performing more than 22,000 procedures per year, Hospital for Special Surgery (HSS) in New York City is renowned for its mission to enhance the hospital experience for the growing number of ambulatory surgery patients seeking excellent care, a return to pain free mobility, as well as the resumption of daily activities ranging from walking to acrobatics.

With on-staff team physicians and athletic trainers for several sports teams - including the New York Knicks, New York Mets, New York Giants, and even the United States National Rowing Team - HSS has become a focal point for sports rehabilitation. Patients of this caliber at HSS are often directed to the adjunct Sports Rehabilitation and Performance Center in conjunction with or after completion of rehabilitation to address fitness, a return to sports, or other physical challenges.

The Performance Center offers multidisciplinary services for those who want to improve performance, whether they are recovering from an orthopedic or sports-related injury or simply seeking to take their fitness to the next level. Staffed with physical therapists, certified athletic trainers, strength and conditioning specialists, and exercise physiologists, the team at the Performance Center creates individualized treatments for its patients intended to improve mobility, prevent limiting disabilities, and of course, counter any incidents of pain or stricture.

Among the Performance Center’s array of tools to aid the recovering athlete, ultrasound has made quite a name for itself, proving especially useful in addressing soft-tissue inflammation, muscle spasms and trigger points, and pain management. Therapeutic ultrasound is typically delivered at frequencies between 0.8 to 3 megahertz, with lower frequency providing deeper penetration up to 2 inches.

“Ultrasound really has two ways of working,” says Lee Rosenzweig, PT, DPT, CHT, a therapist at HSS. “One is a thermal effect, by using ultrasound on a continuous cycle which creates a soft-tissue heating, and can help to relieve pain. Another effect is accomplished using a pulsed wave in which the beam is pulsating either 20 percent or 50 percent of the time - this is used to achieve mechanical effects, to relieve stiffness and pain.” 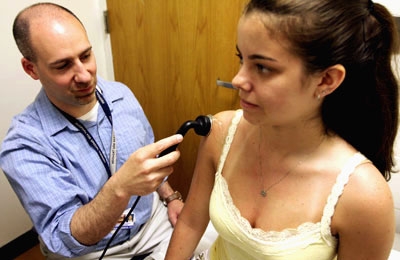 In cases where heating is not desired, such as with acute inflammation or wound care, a pulsed wave ultrasound is more often used, which provides mechanical effects such as increased permeability of cell membranes and possibly repair of tissues. However, the thermal effects of ultrasound therapy have been found to be beneficial in the treatment of musculoskeletal injuries, breaking down scar tissue and helping to stretch tendons.

“Ultrasound is excellent as an adjunct before a patient is going to stretch,” says Rosenzweig. “Therapists can use ultrasound before a patient begins stretch exercises as it creates a deep heating, and may make a more effective, more comfortable stretch. It can be used on any muscle, hamstring, shoulder, a calf, or even the Achilles tendon. When working with conditions like tennis elbow, therapists can work on the forearm muscles with ultrasound and then provide a more effective stretch.”

Especially when dealing with orthopedic conditions following surgery or injury, ultrasound therapy can have a wide range of applications, including musculoskeletal pain. Along with muscle spasms and trigger points, specialists have also used therapeutic ultrasound to alleviate nerve root impingement and various type of neuritis, heating the surrounding tissues to increase blood flow and promote healing.

In particular, bursitis - an inflammation of small sacs of synovial fluid in the body - has become a focal target for ultrasound application. These sacs rest at the points where muscles and tendons slide across bone and normally create a smooth functional gliding surface, making normal movement painless. However, when these sacs become inflamed, movement in the area becomes painfully difficult.

“I think one of the best conditions for using therapeutic ultrasound is bursitis, especially in relieving pain,” says Rosenzweig. “On occasion, ultrasound alone - even without other therapies - can be helpful for bursitis. For example, it’s very effective for trochanteric bursitis which is found in the hip, as well as subacromial bursitis in the rotator cuff.”

But ultrasound is not a quick fix and should be viewed as an auxiliary to any treatment plan rather than a solution to a nagging sports injury.

“Ultrasound is a passive modality, like using a heating pad or an ice pack,” says Rosenzweig. “If you hurt yourself, sure an ice pack or heat pack is going to help, and so will ultrasound. However, in the absence of exercises, its benefits are probably going to be more short-lived. And I think that for a patient who wants to have a more effective, long-term solution to a repetitive strain injury or a muscular injury, it should really be accompanied by exercise programs that engage the patient in the treatment as well.”

He continues, “I think that in treating conditions - like rotator cuff injuries and whiplash injuries - with ultrasound, therapists should be using it as a complimentary or an adjunct to the standard regimen of exercises and stretches. Some of the private therapy offices offer what we call ‘shake and bake’ - where they just want to do the easy, quick thing to make money. They don’t incorporate the exercises and the education to the patients. We like to use ultrasound as an adjunct to exercises for rotator cuff or whiplash injuries. So, it definitely has a role in those things, but it should be used in conjunction with the appropriate exercises that are prescribed by a physical therapist.”

While therapeutic ultrasound is generally safe for most people, there are certain conditions and patients that are prohibited from its use. For example, if used improperly ultrasound can cause unstable cavitation, in which dissolved gases are released due to the heat generated by ultrasound. Air bubbles in the body can be very dangerous, especially if they course through the bloodstream.

Ultrasound should not be applied to any patient with obtunded reflexes or to any area with significantly diminished pain sensitivity or heat sensitivity, as they may not be able to gauge a possible painful reaction or burn. Likewise, no pregnant or potentially pregnant patient should ever receive ultrasound therapy in an area of the body that would result in exposure to the fetus.

“Obviously, therapists should not do ultrasound over a pacemaker as it can interfere with its normal functions; with metal implants, however, ultrasound can still be used, but on a pulse setting only,” says Rosenzweig. “On a continuous setting, ultrasound might create a thermal effect, so I’d be especially cautious about using ultrasound on these patients. On pregnant patients, ultrasound might be acceptable to use on a shoulder or limb, but I would not use it anywhere near the trunk of the body.”

Experts also advise that ultrasound should not be used over a malignant tumor as ultrasound may increase the size of the tumor and may even cause metastases. This advice may also apply to patients who have a history of malignant tumors because it is possible that small tumors might exist without either the patient or physician’s knowledge.

“Therapists do not want to apply a thermal effect to an area that has a known tumor,” says Rosenzweig. “The only exception being if the patient is really terminal, and the doctor says this is palliative treatment to make the patient more comfortable. But if you have somebody who’s being treated for say, breast cancer, and it’s expected that it’s going to be resolved, ultrasound would not be recommended.”

Another problem that therapists in the field are confronting is weaning patients from ultrasound therapy - patients for whom ultrasound may have a short-lived effect and continue to return to the therapist. Also, patients who come in seeking ultrasound raise a red flag for many therapists; ultrasound usage in patients with chronic pain is ill-advised as the treatments can be performed only a limited number of times.

According to Rosenzweig, “Therapists use ultrasound anywhere from six to 12 sessions – it’s part of the patient’s therapy, so therapists might do it for five minutes, then perhaps twice a week anywhere from thee weeks to six weeks. I wouldn’t use it more than 12 sessions because one of two things are going on: either it’s better after six weeks and the patient doesn’t need it anymore, or, if the condition has not improved, then that’s probably not the answer to the problem.”