Experts say it’s never too late to reap the benefits of exercise, and a program offered in New York City senior centers is improving quality of life for many older adults. The exercise program, offered by Hospital for Special Surgery (HSS) in senior centers in New York City’s Chinatown and Flushing, Queens communities, has helped decrease pain, improve mobility and enhance the overall health of many participants, according to a study by HSS.

The research, titled “Impact of an Asian Community Bone Health Initiative: A Community-Based Exercise Program in New York City,” was presented at the American Public Health Association Annual Meeting on November 5 in Boston.

The Asian older adult population in New York City grew by 64 percent from 2000 to 2010, and one in four seniors lived in poverty in 2010. “This population is at risk for osteoarthritis and osteoporosis,” said Laura Robbins, DSW, senior vice president of Education and Academic Affairs at HSS. “They are more than twice as likely to have no health insurance coverage compared to other major race and ethnic groups. Cultural and linguistic barriers limit access to healthcare services.” 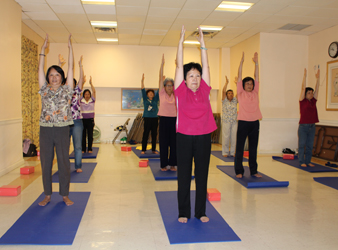 To address these issues, Hospital for Special Surgery developed the Asian Community Bone Health Initiative, which is comprised of culturally-relevant, bilingual education and exercise classes. The initiative plays an important role in enabling the hospital to meet the musculoskeletal health needs of Asian older adults living in New York City, according to Sandra Goldsmith, MA, MS, RD, director of Public and Patient Education.

Six eight-week sessions of the Arthritis Foundation Exercise Program (AFEP) and three eight-week yoga exercise classes were conducted by bilingual instructors at four senior centers in Chinatown and Flushing, New York. The programs promote self-management of arthritis and other musculoskeletal conditions through exercise.

“Getting seniors to be active in any way will generally improve their quality of life and help them function better in their everyday activities,” said Linda Russell, MD, a rheumatologist and chair of the Public and Patient Education Advisory Committee at Hospital for Special Surgery. “People believe that if you have arthritis you shouldn’t exercise, but appropriate exercises actually help decrease pain.” 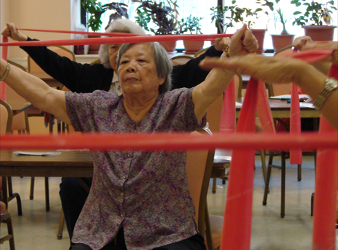 The program was offered between November 2011 and September 2013, with a total of 199 participants. A survey was distributed before and after the exercise classes to evaluate pain, function and other health indicators, and 119 participants responded.

Nearly all respondents were female and age 65 or older. In the survey, many participants reported that their pain intensity dropped and interfered less with their quality of life. The following statistically significant results are noteworthy:

“The study results indicate that the hospital’s Bone Health Initiative has a positive impact on the musculoskeletal health of the Asian senior population,” said Huijuan Huang, MPA, program coordinator. “While further research is needed, HSS will continue to offer culturally-sensitive programs to this community to help seniors stay active, decrease pain and improve their overall health.”