Two new studies by researchers at Hospital for Special Surgery have shed light on joint replacement outcomes in patients with rheumatoid arthritis (RA). One study overturns the common belief that RA patients have worse outcomes after a total knee replacement (TKR) than patients who undergo the operation for osteoarthritis. The other study demonstrates that RA patients who undergo a total hip replacement were as likely to have significant improvements in function and pain as patients with osteoarthritis (OA), even though they did not do as well. 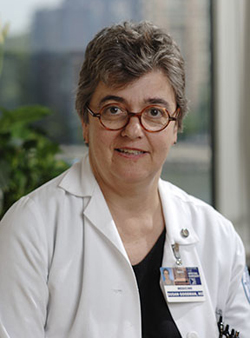 The news will be reported at the European League Against Rheumatism (EULAR) annual Congress of Rheumatology, to be held June 12-15, in Madrid, Spain.

The studies were made possible by the HSS Total Joint Replacement Registry. Started in 2007, this prospective registry includes a gold mine of information including data on all patients who seek care at HSS for knee and hip replacement surgery. “Other hospitals have registries, but what we have is an incredible volume of information on patients that allows us to do interesting studies, because there are so many patients having hip and knee replacement surgeries at our hospital,” said Susan Goodman, M.D., lead author of both studies and a rheumatologist at Hospital for Special Surgery in New York City.

Historically, RA patients have had worse outcomes after joint replacement surgeries, however, whether this was caused by poorly controlled disease or disease treatment was unclear. Starting in the 1980s, effective disease-modifying drugs became available to treat patients with RA. In the late 1990’s, etanercept, infliximab, and other biologic medication came on the market. Today, at HSS over 70% of patients are on  disease modifying drugs and over 50% are on biologics.

In the two new studies, investigators at Special Surgery set out to examine whether outcomes remained worse for RA patients in a cohort with a high prevalence of  potent disease-modifying drugs and biologic agents. Patient pain and function was assessed prior to surgery and two years after surgery using the Western Ontario and McMaster Universities Arthritis Index (WOMAC). This tool measures pain, stiffness, and functional limitation.

Although TKR patients with RA had worse pain and function prior to surgery compared to controls, these differences disappeared after surgery. “In RA patients, their preoperative scores were significantly worse than the osteoarthritis controls, but in fact our knee replacement patients caught up,” said Dr. Goodman. Patients in both groups had similar satisfaction rates.

Investigators also identified 32 RA patients and 342 OA patients who underwent a TKR revision. In this analysis, they discovered that OA and RA patients had similar pain and function pre-operatively, but patients with rheumatoid arthritis actually had significantly less pain, better function, and were much more satisfied at two years. “Our RA patients undergoing knee replacement revisions did better than our osteoarthritis patients,” said Dr. Goodman.

“When we looked at function using the WOMAC scale, function was significantly worse in the rheumatoid arthritis patients prior to surgery, but interestingly, when we looked at how they did two years down the road, they were as likely to have an improvement in function and pain,” said Dr. Goodman. Almost 100% (RA, 96% and OA, 95%) had a ten point change in score—a ten point change is considered clinically significant. Rheumatoid arthritis patients, however, had worse outcomes. At two years, patients with RA were more likely to have a poor function WOMAC score of 60 or less (18% vs. 4%) and a poor WOMAC pain score of 60 or less (12% vs. 3%). Patients who expected to do well with the surgery had a significantly decreased risk of poor pain and function.

“The rheumatoid arthritis patients have a great response in terms of hip replacement and their hip function improved. Nonetheless, they were a group that did not do as well,” said Dr. Goodman.

“Many RA patients have a worsening or flare of their disease six weeks after surgery,” said Dr. Goodman. “It may be that those patients aren’t able to do their physical therapy because they are not feeling well, and maybe that contributes to poor outcomes down the road.”

Clearly, there is a difference in knee replacement versus hip replacement in patients with RA, but it is unclear exactly what the difference is. “Perhaps the RA patients undergoing hip replacement are delaying their surgery too long. Maybe if we intervene sooner, we would do better functionally,” said Dr. Goodman. The HSS investigators plan to conduct further research to identify possible differences between the two groups.

Both studies were supported by a Centers for Education and Research on Therapeutics grant from the Agency for Healthcare Research and Quality.

Other HSS investigators involved in the knee replacement study include Wei-Ti Huang, M.S., Mark Figgie, M.D., Lisa Mandl, M.D., MPH, and Michael Alexiades, M.D. Both at HSS at the time of the study, Rebecca Zhu, B.A., now at Yale Medical School, and Beverly Johnson, M.D., now at Albert Einstein College of Medicine, were also involved with the research.