After graduating from Providence College, Paul worked for four years as a financial analyst at Goldman Sachs, where he specialized in derivatives and system enhancement to improve trading capability. After a few years, he decided to transition into healthcare. He went back to school and simultaneously entered Columbia University's four year BSN/MSN/DNP program for nursing as well as Northeastern University's combined MBA/MS finance program.

Over the course of the next four years, Paul completed all five degrees, becoming an adult-gerontology nurse practitioner with a subspecialty in palliative care. In 2015, while completing his doctorate, Paul was hired to work at NewYork-Presbyterian Hospital to manage a team of data scientists to help fulfill clinical needs with analytic solutions. Paul came to HSS in 2017 and is grateful to be part of such a wonderful team and hospital.

In addition, Paul is an author, inventor, entrepreneur, and public speaker. Due to his unique knowledge of the interplay of clinical practice, finance, and technology, he continues to be recognized nationally, receiving over 20 awards for contributions to healthcare including recognition by Crain's New York as among their “40 under 40” and by Modern Healthcare as a "Top 25 Innovator."

Paul is an inaugural fellow of SONSIEL, the Society of Nurse Scientists, Innovators, Entrepreneurs, and Leaders and a member of the American College of Healthcare Executives, The American Association of Nurse Practitioners, and the American Nurses Association. He serves on the board of visitors of Columbia University School of Nursing.

When not working, Paul sings professionally at various events and spends time with his wife and son. 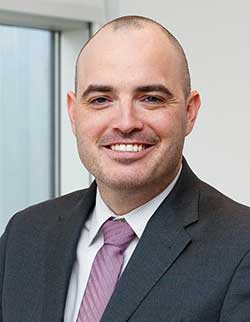 Paul Coyne in the News: