A study by researchers at Hospital for Special Surgery has provided the first evidence that the shape of a person’s knee could be a factor in the decision of whether a patient should undergo anterior cruciate ligament (ACL) reconstruction after an ACL tear. The study is published online ahead of print in the Proceedings of the Institution of Mechanical Engineering. 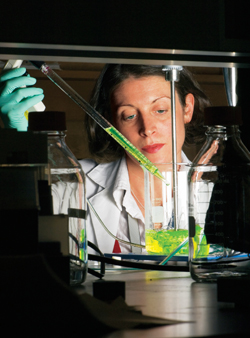 “This is the first study to show that after your ACL is ruptured, the changes in the mechanics of the knee can really be affected by the shape of the knee,” said Suzanne Maher, Ph.D., associate director of the Department of Biomechanics at Hospital for Special Surgery, New York City. “Previously, researchers had only conducted studies looking at whether a particular knee shape makes a person more likely to have an ACL injury, specifically in the athletic population.”

Each year in the United States, 200,000 individuals tear their ACL, including 80,000 athletes. These injuries cost the U.S. health care system $1 billion. An ACL tear puts individuals at a greater risk for developing osteoarthritis, joint degeneration, and loss of the meniscus (cartilage that provides structural stability to the knee when it experiences tension or is twisted). These problems may be prevented by an ACL reconstruction, but not all patients need this surgery. Some individuals have more stable knees and will therefore not develop further problems. If a person is not an athlete playing a sport that involves pivoting, such as soccer or basketball, nonoperative treatment is an option. Identifying patients who can avoid surgery without developing further problems has been tricky.

In the new study, investigators conducted experiments using nine cadaveric knees to examine how knee shape impacts knee mechanics during walking, after a person has torn their ACL. The specimens included the knee joint plus three to four inches of the leg on either side of the knee joint line. The researchers outfitted these knees with a sensor that measured the contact stresses of a critical weight-bearing area on the top of the shinbone called the tibial plateau. They then mounted the knees on a machine that flexed and extended the specimens while applying forces in many directions, all of which together mimics the act of walking. The machine cycles through a step of walking in two seconds.

At 45%, a person is in mid to late stance. Dr. Maher explains that at 0% of the gait cycle, a person’s heal strikes the ground, and at 14%, the heal and most of the foot is in contact with the ground. A toe comes off the ground and the knee starts swinging at 60% of gait.

While all knees with ACL tears experienced higher stresses in the back part of the tibial plateau, however, some knees also experienced higher stresses in the front of the plateau. “The knees that showed changes in the front of the knee had specific shape features. For example, they had a less concave tibial plateau,” said Dr. Maher. “If the tibial plateau has a very deep valley and then you have a femur (thigh bone) sitting in a deep well, that is going to give you a very stable knee. So, when you tear your anterior cruciate ligament, it is not going to have a huge effect.” Increased tibial slope was another predictor of increased stress.

“This is a limited study because these are dead knees, we are only looking at walking, it is only a small sample size, we have focused on the inside of the knee, etc., but it provides a glint of information about how the knee functions after an ACL rupture,” said Dr. Maher. “Even though this is a lab based study, it suggests that the shape of a person’s knee may be ultimately used as some guidance as to whether certain patients should have their ACL replaced or repaired versus other patients.”

The fact that all patients had increased stress in one area of the tibial plateau could also help researchers improve ACL reconstructions. “There are very few models that allow you to really understand the forces acting across the knee during walking, let alone how those forces are changing when the ACL is injured,” said Dr. Maher. “What this study is telling us is there is a particular part of the gait cycle where your ACL is very active. It is very active in the latter part of stance phase. When designing an ACL replacement, researchers may want to pay close attention as to what it does in the latter part of the stance phase.”

The work was funded, in part, by money from the National Institutes of Health.