Common Conditions of the Wrist: A Powerful, but Vulnerable Joint

From the issue, Keeping the Hand and Upper Extremity Healthy

The wrist is one of the most complicated joints in the body. It allows you to wave, hammer, stir and throw objects. When that motion is compromised by discomfort or injury, it can dramatically impair how you go about your day.

Wrist injuries are among the most common problems of the upper extremity, and there are new treatments available. Having your symptoms assessed early by a hand surgeon may save you a lifetime of pain and disability.

Anatomy of the wrist 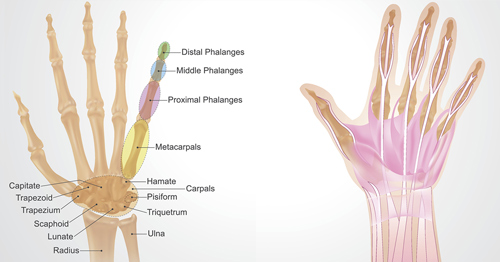 Both of these painful disorders are due to compression of the tissues running through "tunnels" in the wrist and at the base of the thumb. The carpal bones of the wrist and the transverse carpal ligament form the carpal tunnel. The median nerve and nine tendons that flex the fingers and thumbs pass through this tunnel.

Carpal tunnel syndrome occurs when there is pressure on the median nerve, causing numbness, tingling, and weakness. With de Quervain's syndrome (also called de Quervain's tendinosis), the tunnel where the tendons on the thumb side of the wrist run through are thickened and cause pain – especially during grasping, twisting, or forming a fist. There may also be swelling on the thumb side of the wrist and a catching or snapping sensation when moving the thumb.

These conditions may be related to overuse injuries due to repetitive stress on the wrist. Changes in hormones, such as during pregnancy, as well as rheumatoid arthritis can also raise the risk of developing these tunnel syndromes. If you have these symptoms, a doctor will examine your wrist and hand function and ask you to hold it in different positions to assess your discomfort. You may also have tests of muscle and nerve function.

Carpal tunnel syndrome and de Quervain's tendinosis are often treated using special splints to rest the wrist and thumb, frequent breaks from repetitive activities, anti-inflammatory medications such as ibuprofen or naproxen, and sometimes cortisone injections. There are stretches you can do regularly before and after the repetitive activities to help reduce the onset of symptoms. If after several months you are still experiencing discomfort or if your symptoms were severe from the beginning, you may need surgery to cut the ligament to take the pressure off the median nerve (for carpal tunnel syndrome) or release the tendon sheath putting pressure on the thumb tendons (for de Quervain's syndrome). Both can be done on an outpatient basis, followed by splinting and hand therapy to restore lost strength and range of motion.

Anytime you fall on your wrist, you are at risk of a fracture. It can happen during sports, while riding a bicycle or scooter (a trend in recent years as more adults ride motorized scooters in cities), skateboarding, or hiking. Older individuals with osteoporosis are also prone to fracturing a wrist during a fall.

The most common break in the wrist is called a distal radius fracture – a break in the arm bone called the radius. It happens when you fall on an outstretched wrist. Complex wrist fractures may involve not only the radius, but also the ulna and carpal bones. A fracture will cause pain, swelling, and bruising.

The sooner you see a doctor for an evaluation, the sooner you can receive the most effective treatment. The treatment you need depends on how much bone displacement has occurred and how much intervention it will take to move the bones back to their correct positions. Some fractures require only a cast, while others may need surgery with hardware such as plates and screws to fix the bones in the proper place. The hardware is usually left in place permanently unless it causes irritation of the soft tissues. Healing generally takes about six weeks. A hand therapist can support your recovery.

There are steps you can take to avoid a wrist fracture. Wear wrist guards when doing activities such as rollerblading, skateboarding, or snowboarding. Watch your terrain and don't go too fast when you are riding a bike or scooter. Avoid distractions such as talking on the phone or wearing headphones, so you can be aware of who is around you and any vehicles near you.

If you've ever fallen on an outstretched hand, you may be at risk of SLAC wrist. SLAC stands for "scapho-lunate advanced collapse," characterized by arthritis that can cause symptoms ranging from mild to debilitating. It happens when the fall tears the scapho-lunate (SL) ligament, which binds the scaphoid and lunate bones. An X-ray of the area typically looks normal right after the injury, but one to three years (and sometimes decades) later, there is pain and instability of the wrist, and an X-ray shows that the scaphoid and lunate bones have separated.

If you develop pain, swelling, or bruising after falling on your wrist, see a doctor right away. SLAC wrist can decrease range of motion, and the doctor may actually be able to feel the bones shifting. An MRI would show the torn ligament. Even when the SL ligament is surgically repaired within six weeks of injury, 30% of patients still develop arthritis in the joint. Surgeons now know that they need to repair four different wrist ligaments early after the injury to achieve the best patient outcomes.

If you have SLAC arthritis that developed years after an injury, you may find it increasingly difficult to open a jar, lift a pan, do yoga, or open a doorknob. As many as four to five million Americans may be living with these kinds of impairments. To treat the arthritis, a hand surgeon can either partially fuse the scaphoid and lunate bones or remove them. Both surgeries reduce symptoms, but also range of motion in the wrist. Hand therapy is vital for regaining lost function.

There is hope for those suffering from moderate to severe SLAC arthritis: Hospital for Special Surgery and Brown University investigators developed a total wrist replacement, which the U.S. Food and Drug Administration approved in March 2020. Surgeons plan to start using this promising implant in November 2020 in patients with advanced SLAC arthritis.

Disorders of the wrist can have a significant impact on your ability to get through the activities you normally engage in every day. Seeing a hand surgeon – an orthopedic surgeon with advanced training in the care of the upper extremity – soon after your symptoms begin gives you the best chance of receiving the most effective treatment early, including nonsurgical therapies, before long-term stiffness and immobility set in.

More from this issue