Brian Williams to serve as toastmaster

Hospital for Special Surgery (HSS) will celebrate its 150th anniversary and honor the City of New York at its 30th Annual Tribute Dinner. Special guest Mayor Michael Bloomberg will accept the award on the City’s behalf at the event on Monday, June 17, at the Waldorf Astoria in New York City. 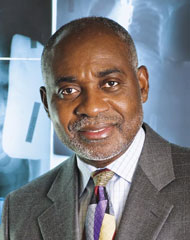 The Dinner will also pay tribute to renowned spine surgeon Oheneba Boachie-Adjei, M.D., chief of the Scoliosis Service at HSS, with the Lifetime Achievement Award.

The history of Hospital for Special Surgery, founded on the Lower East Side in 1863, is intertwined with the history of New York. “As we celebrate the hospital’s 150th anniversary, it is fitting that we recognize New York City,” said Lou Shapiro, HSS president and CEO. “As New York has flourished to become a leading financial, cultural and social force over the last 150 years, Hospital for Special Surgery has grown to become a world leader in orthopedic and rheumatology treatment, education and research.”

Mr. Shapiro added that the hospital is also honored to recognize Dr. Boachie for his many achievements. "He never hesitates to take on the most complex cases. His skill as a spine surgeon is matched only by his unwavering commitment to help those less fortunate, particularly in his native country of Ghana, Africa."

Dr. Boachie has distinguished himself as both an outstanding spine surgeon and a compassionate humanitarian in the United States and abroad. He has served as chief of the Scoliosis Service at HSS since 1994. People come from across the country and around the world when they require highly skilled surgical care for scoliosis and other complex spine conditions. In many cases, surgery to correct severe spinal deformities can be life-saving.

“I am deeply honored to receive the Lifetime Achievement Award from Hospital for Special Surgery,” Dr. Boachie said. “It has been a privilege to work and grow professionally at one of the finest specialty hospitals and orthopedic research centers worldwide. HSS has also played a key role in helping me achieve my life-long dream of opening a hospital in Ghana.”

In 1998, Dr. Boachie founded the Foundation of Orthopedics and Complex Spine (FOCOS), an organization committed to providing affordable medical care to patients with spinal deformities and other orthopedic problems in developing countries. Since its inception, FOCOS teams have treated more than 27,000 local and international patients. They have performed more than 1,000 surgeries, including complex spine operations, knee and hip replacements and other orthopedic procedures.

Last year, HSS representatives, along with those from the Scoliosis Research Society and executive and volunteer staff, joined Dr. Boachie to open a 50-bed specialty hospital providing comprehensive orthopedic and rehabilitative services for adults and children in Ghana. The FOCOS Orthopaedic Hospital is fully accredited to operate both inpatient and outpatient departments.

"Dr. Boachie has earned an international reputation for his expertise in the treatment of scoliosis, kyphosis and spine reconstruction in both adult and pediatric patients," said Thomas P. Sculco, M.D., surgeon-in-chief at HSS. "His pioneering work has improved surgical techniques and patient care and has led to major advances in the field of scoliosis surgery."

Dr. Boachie has published and lectured extensively on topics in spine surgery, with special emphasis on surgery to correct spinal deformities. He is an inventor and holds several patents for devices used in spine surgery. In 2004, he received the American Academy of Orthopaedic Surgeons’ Humanitarian Award.

The Dinner is among the events celebrating Hospital for Special Surgery’s 150th anniversary this year. HSS was founded when a doctor opened his own home on the Lower East Side to destitute street children with disabilities.

The new book, "Anatomy of a Hospital," tells the fascinating story of HSS and is available at HSS.edu/store and on Amazon.com.