Researchers at Hospital for Special Surgery have identified a potential new target for drugs to treat patients with rheumatoid arthritis (RA), a protein known as IRHOM2. The finding could provide an effective and potentially less toxic alternative therapy to tumor necrosis factor-alpha blockers (TNF-blockers), the mainstay of treatment for rheumatoid arthritis, and could help patients who do not respond to this treatment. Efforts to develop drugs that hone in on this new target are underway. 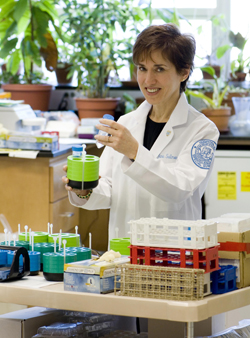 Jane Salmon, MD, Collette Kean Research Chair and co-director, Mary Kirkland Center for Lupus Research at Hospital for Special Surgery (HSS) in New York City, and an author of the study. “We have identified a clinically relevant target that can be applied to patients in the near term.” The study will appear online, ahead of print, on January 25, in the Journal of Clinical Investigation and in the February 2013 print issue.

Rheumatoid arthritis, an autoimmune disease, is triggered, in large part, by TNF-alpha, a small signaling protein usually involved in launching protective systemic inflammatory responses. With excessive TNF production, however, immune cells can become activated inappropriately and cause tissue inflammation. This produces a number of diseases, including RA. While TNF-blockers help many RA patients, these treatments are very expensive, and some patients do not respond. For this reason, researchers have been searching for alternative targets in patients with inflammatory diseases against which drugs can be directed. 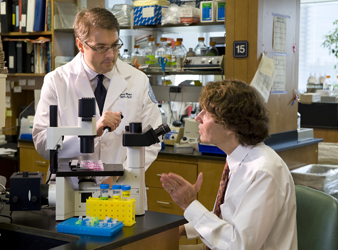 “TNF can be thought of as a balloon tethered to the surface of cells. To work, it must be cut loose by signaling scissors called TACE (TNF-alpha converting enzyme),” said Carl Blobel, MD, PhD, program director of the Arthritis and Tissue Degeneration Program at HSS. While blocking TACE could be another way to treat rheumatoid arthritis, researchers know this strategy would likely have side effects since patients lacking TACE are prone to skin infections and intestinal lesions.

Earlier this year, HSS investigators demonstrated that the TACE scissors are regulated by molecules called IRHOM1 and IRHOM2, which are thought to wrap around TACE and help it mature into functional scissors. They also demonstrated that mice that are genetically engineered to lack IRHOM2 lack functional TACE on the surface of their immune cells and don’t release TNF. Surprisingly, these mice are healthy, and do not develop skin or intestinal defects.

In the current study, HSS researchers set out to investigate why this paradox exists. After examining tissues of IRHOM2-deficient mice, they found that IRHOM2 regulates TACE on immune cells, whereas IRHOM1 is responsible for helping TACE mature elsewhere in the body, such as in brain, heart, kidney, liver, lung and spleen cells. “IRHOM2 appears to have a more restrictive and exclusive function in immune cells,” said Dr. Blobel.

The researchers then set out to determine whether blocking IRHOM2 could be a strategy to treat RA. They used a mouse model that mimics human rheumatoid arthritis in mice genetically engineered to be deficient in IRHOM2. They found that these rodents did not develop inflammatory arthritis and were otherwise healthy.

“When we tested mice that don’t have IRHOM2 in a model for inflammatory arthritis, we found they were protected and they were protected as well as mice that didn’t have any TNF,” said Dr. Blobel. “Because TNF is the driver of rheumatoid arthritis in human disease, as evidenced by how well anti-TNF drugs work, we feel that this provides a completely new angle on blocking TNF release. It would be wonderful to be able to inactivate TACE in a tissue-specific manner and IRHOM2 provides a unique mechanism for us to do so.” 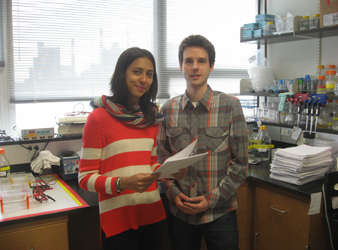 Using drugs that inactivate IRHOM2 in humans, clinicians will be able to block the function of TACE only in immune cells. “We can prevent the deleterious contribution of TACE to rheumatoid arthritis patients and preserve its protective function in skin and intestines,” said Dr. Blobel. “With IRHOM2, we have a unique and unprecedented opportunity to inactive TACE only in certain cell types, and not in others, and there is currently no other effective way of doing that.”

The researchers say the next step is to identify antibodies or pharmacological compounds that can be used to block the function of IRHOM2 and are safe in patients. These HSS investigators are currently working to identify and test such agents. “In theory, IRHOM2-targeted drugs will have less toxicity than TNF alpha blockers,” said Dr. Salmon. “They block TNF release only from specific cells, those known to contribute to joint inflammation and damage.”