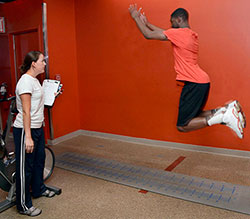 A student from Curtis H.S. in Staten Island amazes with his broad jump.

More than 150 New York City high school football players got a taste of the big leagues at a special “combine” offered at Hospital for Special Surgery (HSS) on August 9. Open to athletes in the Public Schools Athletic League (PSAL), football players from 27 schools took advantage of the free pre-season health and fitness screening at HSS, the official hospital for the New York Giants and other pro teams.

Hospital for Special Surgery offers the annual screening to avoid what could be a parent’s worst nightmare. While playing a sport, often football, a teen athlete collapses on the field and doesn’t make it. Every year, such cases are reported around the country. Sometimes the tragedy is the result of an injury. But it can also be due to an underlying health problem that went undetected before the game or a previous injury that did not completely heal, according to James Kinderknecht, MD, a primary care sports medicine physician at HSS.

The risks inherent in playing football have made medical clearance mandatory for all New York City high school students wishing to play the sport. Increased attention to the dangers of concussions and other injuries has also underscored the importance of being in good condition not only before the season starts, but being completely healed before returning to play after an injury.

Doctors also checked the young athletes for previous injuries to make sure no one returns to the game too soon. Sixteen year-old Orville Lactaoen of Queens tore his anterior cruciate ligament at last season’s final game. After he was injured, he went to a special PSAL Football Clinic at HSS offered on Mondays during football season. Orville, who had surgery at HSS to repair his torn ligament, was at the August health screening, anxious to see if he could return to the game.

“We believe we are meeting a need in the community, and it gives Hospital for Special Surgery the chance to provide a valuable service,” said Dr. Kinderknecht.

Students lacking good health insurance can fall through the cracks of a fragmented health care system. Special Surgery wants to make sure, at least in the case of the young athletes, that this doesn’t happen, according to John Cavanaugh, PT, ATC, SCS, clinical supervisor, Sports Rehabilitation and Performance Center at Hospital for Special Surgery. 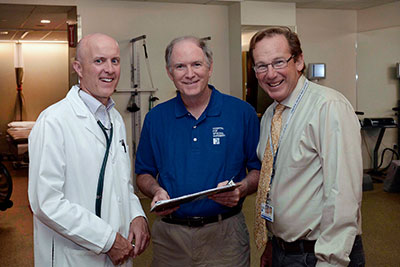 “In addition to giving the students a complete physical, we assess their core muscle strength as well as their lower extremity strength, power and flexibility, information that can lead to injury prevention and performance enhancement,” said Mr. Cavanaugh, who organizes the screening each year.

Once the season begins, hospital physicians and certified athletic trainers will provide medical coverage for the games at seven schools. And specialists will ensure that players receive the necessary care if they get hurt on the field -- again, regardless of ability to pay. The hospital’s PSAL Football Clinic will again be open on Mondays during football season to see players injured during a game.

“We are committed to making sure these high school athletes have access to medical care, so they don’t have to worry about ‘who do I see, and how do I get in,’ because the clinic is accessible,” Dr. Kinderknecht explained. “It’s not always easy to get in to see a doctor when you get hurt. The more cumbersome the process, the more likely it is a student will fall through the cracks. The goal is to make it as easy as possible, removing any financial barriers that may be there, as well.”