Scientists Discover Genetic Changes that May Predispose Women to Preeclampsia 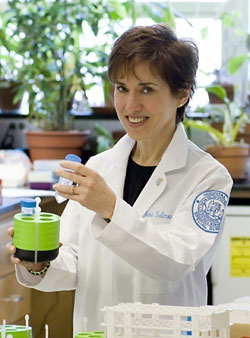 Scientists have discovered genetic defects that appear to predispose women to a common pregnancy-related medical problem called preeclampsia that can threaten the life of both baby and mother.

Lead investigator Jane Salmon, M.D., a rheumatologist and senior scientist at Hospital for Special Surgery in New York City, and colleagues uncovered genetic mutations in women with the autoimmune diseases associated with increased risk of preeclampsia, as well as in patients with preeclampsia who did not have an autoimmune disease.

Their findings appear in an article in this week’s PLoS Medicine, a peer-reviewed open-access journal published by the Public Library of Science.

Preeclampsia affects up to 10 percent of pregnancies in the United States. The condition claims the lives of more than 60,000 women each year in developing countries. It is diagnosed by the onset of high blood pressure and appearance of protein in the urine. Because the cause of preeclampsia is unknown, there are no reliable means to predict its occurrence and no satisfactory prevention or treatment. When preeclampsia becomes life-threatening, the only option is to deliver the baby pre-term.

The study authors hypothesized that genetic variations in proteins that regulate the complement pathway (a series of factors that provides protection from invading microbes) lead to unchecked inflammation, and that such impaired complement regulation, when it occurs in the placenta, may trigger preeclampsia.

In the new study, researchers analyzed DNA from 250 pregnant women with lupus and/or antiphospholipid antibodies. Thirty patients developed preeclampsia during the study, and 10 additional patients had had preeclampsia during a previous pregnancy. The investigators studied specific genes that regulate complement-driven inflammation in these 40 women and found that seven women had a mutation in one of the genes. The investigators also analyzed DNA from 59 women who did not have autoimmune disease, but developed severe preeclampsia, and found that five women in this group had a mutation in one of the genes.

“This study identifies the first genetic risk factors associated with preeclampsia in patients with lupus and/or antiphospholipid antibodies, and also validates these risk factors in a population of patients who do not have an autoimmune disease,” Dr. Salmon said.

Although additional research is needed, the results of the study suggest new targets for treating preeclampsia and raise the possibility that tests to identify women at increased risk for preeclampsia can be developed, according to Dr. Salmon. The research was funded by a grant from the National Institute of Arthritis and Musculoskeletal and Skin Diseases.