A Second, Less Invasive Surgery Alleviates Her Back Pain

An artist who paints gigantic murals, theater scenery and runway sets for Fashion Week is back at her creative, but strenuous, job just months after surgery to relieve debilitating back pain caused by scoliosis. Twenty-seven-year-old Shana Siegel is once again climbing up on high scaffolding, lugging around power tools and five-gallon cans of paint, and even working 13-hour days.

Less than six months ago, she could barely function. A complex eight-hour surgery performed by spine specialist Matthew Cunningham, MD, PhD, at Hospital for Special Surgery in New York City last March helped her get her life back.

At age 13, Siegel had her first surgery for scoliosis in Cleveland, where she grew up. The curve in her spine was getting progressively worse, and she was told she would not live past age 40 without the operation. It went well.

Doctors performed spinal fusion, joining together several vertebrae, placing two rods on either side of her spine and additional hardware to hold everything in place. Siegel was back to school within a few weeks. At age 17, she was playing field hockey. 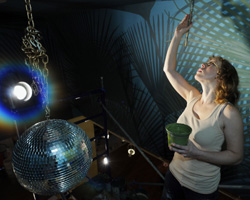 Shana Siegel can now continue to pursue
her painting.

But after she turned 18, Siegel, who now lives in Brooklyn, started having problems. The discs in her lower spine that had not been fused in the operation were starting to wear out. These small, spongy discs normally cushion the vertebrae and serve as shock absorbers. Since the discs in her lower back were no longer functioning properly, Siegel's muscles were being overtaxed and arthritis was setting in.

But after she turned 18, Siegel, who now lives in Brooklyn, started having problems. The discs in her lower spine that had not been fused in the operation were starting to wear out. These small, spongy discs normally cushion the vertebrae and serve as shock absorbers. Since the discs in her lower back were no longer functioning properly, Siegel's muscles were being overtaxed and arthritis was setting in.

By the time she was in her mid-twenties, the pain in her lower back was constant and almost unbearable. She relied on anti-inflammatory medication and rested as much as she could.

"I was becoming withdrawn. I was a mess, dealing with the chronic pain," she says.

She cut back on her activities, but got to the point where she couldn’t stand up straight and felt like she was falling forward. Her work as a scenic painter for theater, including off-broadway plays, became increasingly difficult. In addition to the pain, she was exhausted all the time.

"Reality finally set in," says Siegel. "I was going to need another surgery."

"It’s not uncommon for patients who had scoliosis surgery when they were younger to need another operation five, 10 or 15 years later," says Dr. Cunningham, "particularly when the fusion extends into the lower spine as Shana’s did. The patient or her parents should have been told this at the time of the first surgery. But as years go by, patients feel good, they go on with their lives, and they may forget."

Up to one-third of scoliosis patients will need another surgery down the road. Siegel went to three spine surgeons before she consulted with Dr. Cunningham.

"They told me to wait until I couldn’t bear the pain any more," she says. "They didn’t want to do the surgery."

Such scoliosis revision surgery is a complicated operation requiring the skills of a highly trained spine specialist.

After about six months of searching for a doctor, Siegel felt comfortable with Dr. Cunningham. He prescribed physical therapy and injections of an anesthetic to try to relieve the pain.

"We try to avoid surgery unless it’s the only option," Dr. Cunningham says. "In Shana’s case, the front part of her spine was wearing out and she was in intolerable pain. Her torso was pitched forward from extensive arthritis below the prior fusion, and from the inability of her trunk muscles to compensate for the changes. She was not being helped by nonsurgical treatment."

When conservative treatments failed to provide relief, Siegel decided to have the eight-hour surgery that would restore her quality of life.

"Because of all the nerves in the back, it was a risk, but I was in enough pain that I had to do something," Siegel says.

The complex and delicate operation entailed taking apart some of the hardware from the first surgery, trimming the bottom of the rod placed during that operation, putting in new instrumentation, taking out some of the bone that was crowding nerves, and fusing the affected vertebrae below the prior fusion, according to Dr. Cunningham.

"Her back pain was caused by abnormal posture and painful motion, and spinal fusion alleviated the pain by realigning her posture and stopping movement in the affected area of the spine," he says. 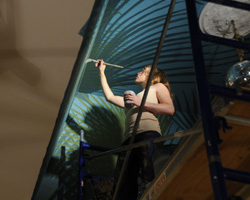 Shana Siegel hard at work after recovering
from Spinal Surgery at HSS.

Traditional revision scoliosis surgery for Siegel would have entailed making incisions in both the front, in the area of the abdomen, and in the back. Dr. Cunningham employed a more recent procedure in which he operated through the back only, an operation called a “posterior lumbar inter-body spinal fusion,” or PLIF. This leads to an easier and quicker recovery.

"It’s a lot better for the patient to do it all from the back than to have an incision in the front, as well," he notes.

Siegel says she is now pain-free and back to work.

"I feel amazing, like a different person," she says.

Back to her busy schedule, she looks forward to returning to scuba diving.