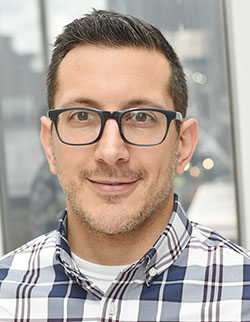 James Gallegro, PT, DScPT, MSPT, CMP, OCS, CSCS graduated with a Master of Science in Physical Therapy in 2000 from Ithaca College and later obtained his Doctor of Science in Physical Therapy in 2015 from Andrews University. He has also completed a manual therapy certification (CMPT) from the North American Institute of Orthopedic Manual Therapy (NAIOMT) through a program with a concentration in differential diagnosis and an emphasis on evaluation and treatment of the spine. James is currently a professor of spinal orthopedics in the DPT program Touro College in NYC. He holds a board certification in orthopedics from the American Physical Therapy Association and is a Certified Strength and Conditioning Specialist through the National Strength and Conditioning Association.

Throughout his career as a physical therapist, he has focused most on outpatient orthopedics with the opportunity to expand his clinical practice beyond conventional orthopedics to include work with performing artists – mainly professional ballet dancers and Broadway performers. That work has included being present backstage and on-site to differentially diagnose acute injuries, as well as treating post-operative and non-operative orthopedic cases.

James Gallegro in the News