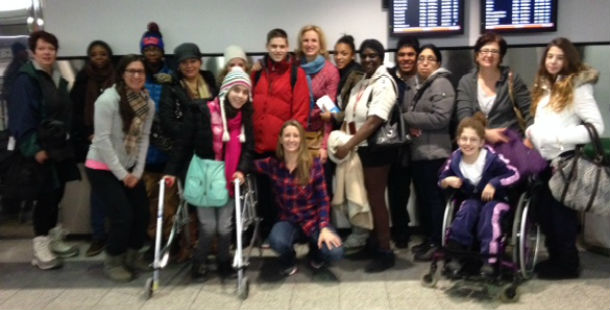 Our sleepy group perked up the moment they spotted an HSS advertisement in LaGuardiaAirport: “Where the World Comes to Get Back in the Game.” As Big Apple Skiers posed for pictures in front of the sign, I realized that for our group the game is not just speeding down a mountain, it is independence. Two days later, it is clear to me that the work needed to speed down a mountain is a part of building the confidence towards independence.

We landed in Gunnison Airport to a skier’s dream of 18 inches of snow with more to come over night and settled into our home for the week. New members seemed anxious and excited for their first trip to Adaptive Sports Center while the return members spoke passionately about their goals of skiing faster and with more freedom.

As I watched each member of the group go through their own routine, which included putting on warm clothing, remembering hats, gloves and scarves, and pulling on heavy boots, which is a chore, my clinical skills as an occupational therapist were hard at work thinking of how this could be made easier for each member. I realized our trip incorporates two separate but related experiences: the physical experience of conquering the mountain and the individualized experience of living in a house and functioning as part of a group.

Once we arrived at the mountain, I was amazed by the range of adaptive equipment available. Anyone can safely go down the mountain with the assistance of the trains instructors and volunteers. As I listened to the members of my group speak to their instructors, one thing was clear: most did not just want to be helped down the mountain. They wanted to achieve the freedom to descend the mountain on their own. For some it might be the first time moving freely more than a few feet without assistance.

Our first day was challenging for both seasoned skiers and our first timers because of the effort required plowing through the fresh powder. At the end of the day, each member seemed to be looking forward to a freshly groomed mountain on Tuesday. Our dance class that night allowed us to move freely, laugh, and try some aerial equipment. Even those who may have started the class seated were moving their bodies standing to the music by the end of the class. Moving our bodies to the music was a great way to end a physically challenging day!

Tuesday morning was used to reflect on the challenges, things we loved, and goal setting on and off the slopes for the rest of the week. With such a large group, we observed how each member brings different talent to the house. Each has expressed interest in helping out in the house more; according to Daniel, “it is nice to help others because I have always needed help.” However, the group appeared to need some guidance to get started and be successful. A chore chart was devised and everyone happily took responsibility for assisting in clean up and set up during meal time.

I decided to spend my second day with one of the new members of our group, Keith. As mentioned by Magda in her previous post, Keith was born with a congenital lower extremity deformity and is ambulating with an above knee prosthesis. Keith is the snowboarder of the group (there is always one). Keith is snowboarding on a board similar to mine. Like any snowboarder, he is challenged with learning to balance his weight and trust his body. However, he has the added challenge of learning to use his prosthesis in a completely new way. As the day unfolded, I watched him progress from needing outside help to stand up to balancing on his board while standing on the downhill slope independently. With each fall Keith was able to get up a little quicker and reach the next skill a little faster. 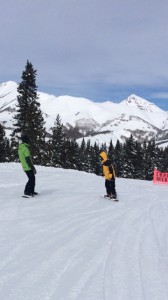 As we left the mountain Tuesday afternoon one thing was clear, each member of the group had accomplished a goal. Rosemary was practicing her turns without the instructors help. Sara, in her sit ski, skied for the first time moving independently without being tethered to her instructor. Valeria, another new comer, mastered standing upright in the slider while navigating the slopes with a huge smile on her face. 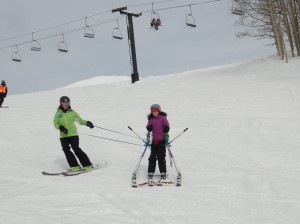 As we prepped for “make your own burrito night,” members of the group were opening cans, mashing avocado, setting the table. The entire group was chatting with excitement about their day on the slopes and looking forward to attacking new, more challenging slopes when we return.

As a member of the HSS Pediatric Rehabilitation Department, I know first-hand how the therapists work daily to assist each individual to “get back in the game.” While “the game” is different for everyone, it is clear to me that every achievement, from putting on a ski boot, carrying 5 plates to the sink, and navigating the slopes, helps to build self-esteem, confidence, and the drive towards independence. As Erin, one of our returning skiers said, “We want to show people who have taken care of us for so many years that we can.”

We look forward to updating you further on our experiences from Crested Butte!

Christine Rocchio is an occupational therapist at the CA Technologies Rehabilitation Center within Hospital for Special Surgery’s Lerner Children’s Pavilion. 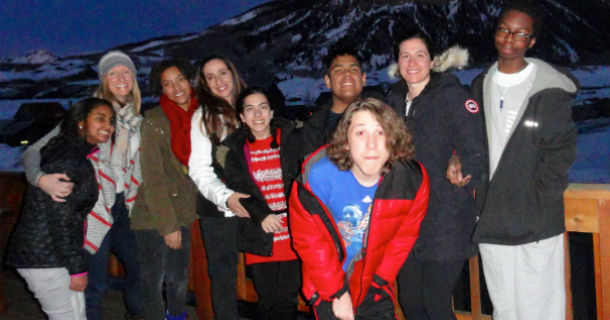 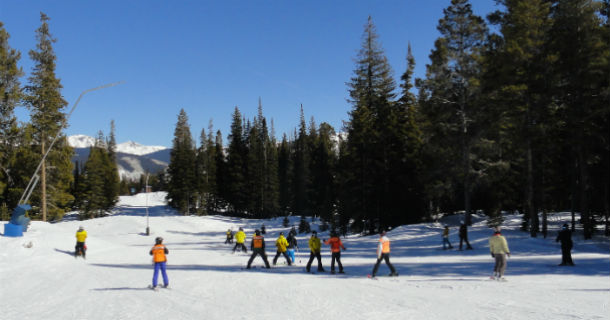 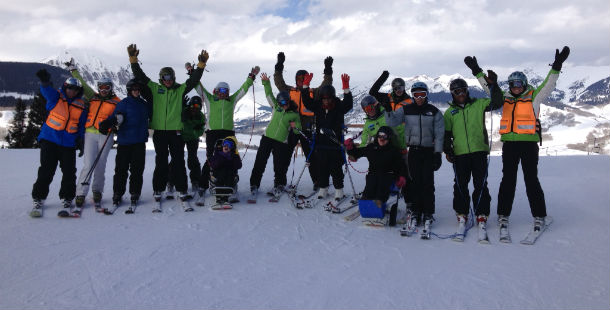