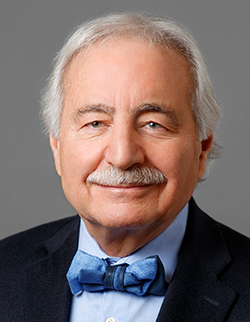 Dr. Rudolph F. Taddonio specializes in orthopedic spine conditions including pediatric and adult scoliosis, degenerative conditions of the cervical, thoracic and lumbar spine and those requiring computer navigated spine surgery. He has been in practice since 1976 and has provided surgical care for over 6,000 patients. Although no longer performing surgery, he is still involved with improving the quality of life for his patients and their families by office consultations and treatments.

He has served as Chairman of the Department of Orthopedic Surgery and Director of the Section of Scoliosis and Spinal Surgery at New York Medical College and as the Director of the Section and the Vice Chair of the Department of Orthopedic Surgery at HSS/Stamford Hospital. He has served as Vice President and President of the Stamford Hospital Medical Staff as well as on numerous hospital committees.

He is a long standing member of several national and international Spine societies including the Scoliosis Research Society.

Dr. Taddonio has engaged in numerous academic presentations as well as journal and abstract publications. His knowledge is pursued worldwide. He has received awards from Best of White Plains Award in the Physician Category, Top Doctors in New York and Connecticut, Alumni Medal of Honor, Physician Recognition, and Most Distinguished Doctors.


Please do not hesitate to contact our office if you have questions regarding your insurance coverage. You may have coverage subject to the availability of 'out-of-network' benefits.

As of December 03, 2019, Dr. Taddonio reported no relationships with healthcare industry.

American Board of Orthopaedic Surgery