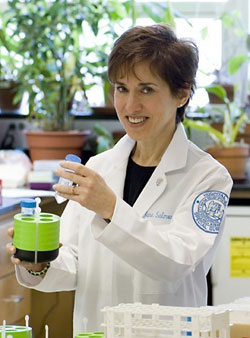 A leading Hospital for Special Surgery research scientist, Jane Salmon, M.D., was chosen to give a presentation at the 25th anniversary celebration for the National Institute of Arthritis and Musculoskeletal and Skin Diseases (NIAMS). This lecture, now archived on the NIAMS anniversary symposium web site, described how unconventional hypotheses can lead investigators to discoveries that have great impact on patient care.

Such an unconventional, “outside the box” approach developed data in animal models about the critical role of complement proteins that allowed Dr. Salmon and her laboratory to launch the PROMISSE Study, an initiative that has expanded knowledge about pregnancy in patients with lupus.  According to Dr. Salmon, Collette Kean Research Chair at HSS, PROMISSE (Predictors of Pregnancy Outcome: Biomarkers in Antiphospholipid Syndrome and Systemic Lupus Erythematosus) has identified biomarkers that predict poor pregnancy outcomes in lupus patients and has shown that women with lupus are likely to have a healthy pregnancy if their lupus is stable at conception.

“PROMISSE validates the importance of using animal models to study human disease. Without our findings in mice, nobody would have considered complement as a mediator of pregnancy complications in lupus patients,” said Dr. Salmon. “This was entirely unconventional. Complement proteins have been considered as useful primarily to fight off infections.  The notion that they could play a key role in pregnancy complications was revolutionary.”

Lupus, which predominantly presents in women during their reproductive years, is a chronic autoimmune inflammatory disease in which the body’s immune system attacks tissues in the body. Various genetic mutations make a person more susceptible to the disease, which may relate to one’s response to environmental factors such as viruses. Historically, women with lupus have been advised to avoid becoming pregnant because of risks to their own health and the health of their fetus. Pregnant women with lupus often develop hypertension and preeclampsia, which can lead to fetal loss and threaten the life of the mother.

In an effort to understand the mechanisms of the disease, and with funding from NIAMS, researchers at HSS developed a mouse model of lupus by injecting pregnant mice with antiphospholipid antibodies (aPLs). “Antiphospholipid antibodies are the strongest predictor of pregnancy loss and complications in lupus,” said Dr. Salmon. In experiments in mice that were deficient in different proteins that cause inflammation, researchers made strides in understanding the disease. “What we discovered unexpectedly was that the complement cascade was critical to mediating damage,” said Dr. Salmon, explaining that the cascade involves 30 proteins. “When there is inappropriate complement cascade activation, there can be tissue damage.” Further research showed that by inhibiting complement, they could save pregnancies in mice.

This research led to the prospective observational PROMISSE study that involves nine centers including HSS and roughly 700 patients with lupus and/or aPLs. Participants are monitored with monthly checkups and research laboratory studies looking at genes and circulating proteins that may predict the course of pregnancy.  The study has led to a number of key findings. First, the prevalence of poor pregnancy outcomes in patients with lupus is lower than expected. Second, mild to moderate and severe lupus flares are extremely infrequent in pregnant lupus patients who are clinically stable at conception and these patients go on to have normal pregnancies. “We can counsel patients that it is important to wait until their lupus is stable before embarking on pregnancy, and we can predict that at that point their outcomes are likely to be good,” Dr. Salmon said.

Researchers have also discovered that lupus anticoagulant, a type of aPL, is the most powerful predictor of poor outcomes in lupus patients. This supports close monitoring of patients with these antibodies and allows doctors to avoid aggressive and potentially dangerous treatments in other lupus patients. Researchers also now know that circulating anti-angiogenic factors – substances that inhibit the placenta from developing properly - are biomarkers that predict preeclampsia in patients with lupus and/or aPL antibodies. “We have learned that activation of complement early in pregnancy can be detected in the blood of women destined to have preeclampsia, and these are women may benefit the most from newly developed drugs that target the complement cascade,” said Dr. Salmon.

A final key finding is that genetic mutations that are associated with uncontrolled complement activation present in some lupus patients who develop preeclampsia. “We studied non autoimmune patients with preeclampsia and found mutations in the same pathway,” said Dr. Salmon. “Thus, we now have an understanding of a manifestation of a relatively uncommon disease that can be very important for a major public health problem, preeclampsia, which occurs in up to 4 percent of women in their first pregnancy.”

The ongoing PROMISSE study was launched in 2003 and will continue through 2013. It has been supported by $12.3 million in support from NIAMS and the Office of Research in Women’s Health.