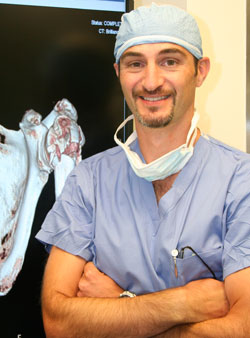 Roughly 3 percent of patients who undergo total hip and knee replacement surgery require critical care services before they are discharged from the hospital, according to an analysis of roughly half a million patients. The study, published online in advance of print in the July issue of the journal Anesthesiology, demonstrates that these elective surgeries are placing an increasing burden on the critical care services of the health care system and hospitals should respond proactively.

“This number is large enough that critical care physicians need to be very familiar with this patient population,” said Stavros Memtsoudis, M.D., Ph.D., director of Critical Care Services at Hospital for Special Surgery in New York City, who led the study. “Hospitals need to understand that it is going to be a significant part of their patient population and allocate resources accordingly.” He pointed out that the study also highlights the risks of these surgeries in older populations with comorbid conditions.

The number of hip and knee replacements performed in the United States yearly is currently over one million and is expected to surpass 4 million by the year 2030. While clinicians have noted that patients undergoing these surgeries have increasing comorbidities, until now, little research has been undertaken to see how these surgeries impact the use of critical care services (CCS).

To find out, researchers turned to a large inpatient database in the United States called Premier Perspective that is often used to study health outcomes. They analyzed data from all patients in this database who underwent hip or knee replacement surgery between 2006 and 2010. In 528,495 patients who underwent these surgeries at 400 hospitals, 3% required CCS. Patients who required CCS had higher mortality rates (2.5% vs. 0.1%), longer hospitals stays, higher costs, and were less likely to be discharged home (40% vs. 63%).

The investigators then compared characteristics of patients who used critical care services with those who did not. They evaluated demographics, comorbidities, hospital specific variables, and procedure specific variables, such as the type of anesthesia used.

The researchers found that patients were more likely to require CCS if they were older, the average age of 69 versus 66. Patients who needed critical care services also had more comorbidities. For example, the odds for requiring CCS increased by roughly 72% if patients were obese, roughly 106% if patients had advanced diabetes, and roughly 56% if patients had chronic obstructive pulmonary disease.

The investigators found that the most common complications leading to use of critical care services were cardiac complications, including heart attack, and pulmonary compromise. Clinically, pulmonary compromise can range from shortness of breath to acute respiratory distress syndrome (ARDS), the latter of which involves prolonged time on a ventilator and is associated with a high risk of death. While any surgery is stressful on the heart, especially in older patients, joint replacement surgery carries a special risk for pulmonary compromise because of the very nature of implanting and cementing a prostheses.

“When a prosthesis is implanted, bone marrow, fat debris and cement particles can enter the blood stream of the patient,” said Dr. Memtsoudis. “The first organ to see that load of embolic material is the lung. In this case, the lung serves as a filter with usually little clinically significant consequences. But sometimes, when either the load of debris is large or the lung itself is compromised by preexisting disease, the resulting inflammation in the lung can cause pulmonary compromise.”

The new study provides data that will help clinicians assess the risk for complications in patients for hip and knee replacements. It also underscores the need for hospitals and critical care units to prepare themselves for the growing number of orthopedic patients who will need critical care services. “Orthopedic patients are not the prime type of patient that people expect in an ICU. It is elective surgery after all,” said Dr. Memtsoudis. “Risk factors for needing critical care services are advanced age and existing coronary artery disease, diabetes, obesity and a number of other comorbidities. Unfortunately, this is the type of population that usually requires hip and knee replacements.”

The researchers recommend that hospitals increase surveillance of high-risk patients undergoing hip and knee replacement surgery, a strategy that has been implemented at HSS. Two years ago, HSS established a team of six critical care physicians to attend to the critical care needs of their orthopedic patients. Now, high-risk patients undergoing joint replacement surgery receive more specialized levels of care.

“We identify patients who are at high risk for complications and we monitor those patients in our recovery room for at least one night. They stay on invasive monitors. We keep an eye on vital signs, pay attention to medication requirements, optimize interventions to address patients’ medical problems and check appropriate labs frequently,” said Dr. Memtsoudis. “If you have someone in an environment where you can observe patients closely, you can pick up abnormalities very quickly and intervene, thus hopefully avoiding more serious consequences.”

Other authors of the study include Ottokar Stundner, M.D., and Michael Nurok, M.B., Ch.B., Ph.D., from Hospital for Special Surgery; Stephen Pastores, M.D., Madhu Mazumdar, Ph.D., M.S., Xuming Sun, M.S., and Ya-Lin Chiu, M.S., from Weill Cornell Medical College. The study was partially funded by the Center for Education and Research in Therapeutics and the Clinical Translational Science Center.