For months, Joan Campbell was confined to a wheelchair and doubted she would ever walk again.  Mrs. Campbell, who lives in Binghamton, New York, suffered complications following double knee replacement surgery.  Her orthopedic surgeon in Binghamton tried to fix the problem with a second surgery on both knees, but Mrs. Campbell, who is 76, ended up in worse shape. Not only could she no longer walk, she could not stand or straighten her legs.  She was confined to a wheelchair and in terrible pain. 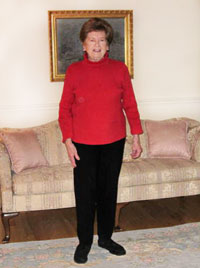 “When I went back to see the doctor in Binghamton, I felt he wasn’t taking it seriously,” Mrs. Campbell says.  “He sent in a nurse practitioner to tell me there was nothing more he could do.  The doctor would not see me.”

Fortunately, a friend of Mrs. Campbell’s niece told her about Hospital for Special Surgery.  The friend’s father needed a second surgery to fix a problem following knee replacement.  A doctor at HSS was able to help him, and he was very happy with the result.

Mrs. Campbell made the four-hour trip from Binghamton to HSS in a special van her son rented to accommodate her wheel chair.  She saw Dr. Alejandro Gonzalez Della Valle, a specialist in hip and knee replacement.

“Without Dr. Della Valle I’d still be in a wheelchair.  He was wonderful,” she says.

After a comprehensive examination, Dr. Della Valle found that Mrs. Campbell had suffered a very rare complication following joint replacement: a rupture of the patellar tendon in both her knees. That explains the “pop” she had heard, first in one knee, and then in the other, not long after she had the knee replacement surgeries.

The patellar tendon is a critical structure in the front part of the knee. It works with the kneecap and the muscles in the front of the thigh to enable us to straighten our legs.  The patellar tendon attaches the bottom of the kneecap, or patella, to the top of the shinbone, or tibia.  When the tendon ruptures, there is often a tearing or popping sensation, which is what Mrs. Campbell experienced.

“The kneecap and the tendons in the front part of the knee allow the patient to straighten the knee, to stand up, to go up and down stairs, and to walk,” Dr. Della Valle explains. “When the patellar tendon tears completely, it’s impossible to do any of these things.”

Dr. Della Valle’s plan to fix Mrs. Campbell’s problem entailed major reconstructive surgery and a very lengthy recovery.  He would perform a rare transplant operation called an “extensor mechanism allograft.”  Dr. Della Valle would replace the patellar tendon and kneecap in both of Mrs. Campbell’s legs.  He would also replace part of the joint replacement implant in her right knee.  It would be her best and last hope of ever walking again.

“It’s a challenging recovery, and some patients are not up for it,” Dr. Della Valle noted.  “But Mrs. Campbell was very stoic and enthusiastic, and she wanted to walk again.”

She felt confident in Dr. Della Valle.  “He was very easy to talk to. Any time I wanted to talk to him, he’d be available,” she says.

Mrs. Campbell had two operations, one week apart, and both were successful.  After surgery, her legs needed to be straight and immobilized so her knees could heal.  Both of her legs were in a cast from her ankles to her hips for four weeks. After the casts came off, she had braces on and several months of physical therapy.

When the braces came off, she took her first steps.  “I didn’t think I could walk, but I did walk. I couldn’t believe it,” recalls Mrs. Campbell who usually uses a cane.  “It makes me feel really good and my family is very happy.  I can walk, go up steps, I have no pain.”

Dr. Della Valle is also very pleased with the result.  “I’m very happy for her.  People have their knees replaced because they want to be able to move around and they want to walk.  Then suddenly they’re in a wheelchair, and they’re told they’re going to be in a wheelchair forever.  Imagine how devastated that patient can be,” he says.  “It’s very rewarding to see Mrs. Campbell coming back with a smile.”

For Mrs. Campbell, the wheelchair is past history.  “When I was in the wheelchair, I couldn’t do anything by myself.  Now I can do almost everything.  I cook, I clean the house, I get around.  It takes me a little while to do it, but I do it.  I’ve been doing very well.”