Six-Year-Old and Mother Invited to Tell Their Story at Advocacy Event in Washington, D.C.

Patricia Vega and her son, Ismael, who turns six this month, have been invited to join Dr. Daniel Green, their orthopedic surgeon, to meet with U.S. Senators and Representatives to personally advocate for the future of musculoskeletal care and continued federal funding for research.  The American Academy of Orthopaedic Surgeons is sponsoring the event, and Dr. Green and little Ismael are representing the Pediatric Orthopaedic Society of North America.

Dr. Green, a pediatric orthopedic surgeon at Hospital for Special Surgery, implanted the metal rods into the leg bones of little Ismael, who was born with osteogenesis imperfecta, or OI, which caused his bones to be brittle and weak. An innovation in OI surgery, the telescoping rods get longer as the child grows, avoiding the need for repeated operations.

Before the surgery, Ismael was carried around by his parents or used a stroller. His bones were so fragile that by the time he was three, he had suffered 12 broken bones and more than 100 microfractures.  Doctors on Long Island told his mother little could be done. They said Ismael would probably never be able to walk and would spend most of his life in a wheelchair.

But Patricia Vega, who is from Hampton Bays, refused to give up hope.  One day, a nurse who was assisting Mrs. Vega in caring for Ismael told her the highly specialized pediatric orthopedic surgeons at Hospital for Special Surgery might be able to help him.

Mrs. Vega went to see Dr. Green, who explained that a newer type of surgery using “telescoping” rods could straighten his bones and enable Ismael to walk.  The special rods, implanted in his thigh bones, would extend, in essence, growing along with her child.  The surgery, in combination with newer bone-building medicines called bisphosphonates, would give her child his best chance to lead a more normal life.

Mrs. Vega agreed to the operation. Until his surgery at age three, life was tough for little Ismael.  As a baby, when he instinctively tried to stand up, his fragile bones could not support his small body, and a bone in his leg would break.

Multiple fractures had caused Ismael’s thigh bones to be severely bent. “The x-rays showed that his femur bone, which was supposed to be straight, was bent at 90 degrees,” Dr. Green recalled. “His bones were so weak they were having microscopic fractures over and over again, and this led his femur bone to develop these massive deformities or curves. His other thigh bone was bent at 45 degrees.”

The surgery entailed placing metal rods in Ismael’s bones to make them straight, prevent future fractures and enable him to walk.  “Placing rods in the long bones of the legs is one of the most common surgeries performed in patients with OI,” Dr. Green said. “The advantage these days is the telescoping rods – they’re a great advance.  In recent  years, we’ve seen excellent results in many cases.”

The special rod, which self-elongates as the child grows, eliminates the need for repeated surgeries to change rods as the child gains height.  Dr. Green says Special Surgery is one of the few hospitals in the region using the telescoping rod system, and doctors are following patients to see how well it’s working.

Ismael’s operation was a success.  He needed to wear casts from his toes to his hips for five weeks and then had months of intensive physical therapy. But the end result was worth it, Mrs. Vega says. “I have no words to explain how happy I was when Ismael walked for the first time. We feel that Dr. Green was sent from heaven.  Without him, Ismael would not be walking.”

Ismael Vega with his mom, Patricia. He can now climb the steps on the school bus.

“There have been tremendous advances in the treatment of OI in the past decade, and Ismael’s case is a very positive illustration of what can be done,” Dr. Green says. “It’s a combination of surgery and medication that has improved the opportunities for children with this disease.  I’ve seen patients in their 40s with OI who, unfortunately, did not have these treatments available when they were children. They have the same type of OI as Ismael, but have spent most of their lives in a wheelchair.”

Hospital for Special Surgery (HSS) has one of the largest osteogenesis imperfecta centers in the region and uses a team approach, including orthopedic surgeons, radiologists, nurses and physical therapists. “The team at HSS seeks to educate parents about the disease. We believe education is the key to empowerment,” Dr. Green says. “We’re very impressed by Mrs. Vega. She’s a strong advocate for her child.” 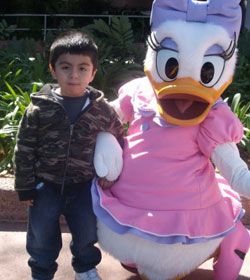 Ismael poses with a new friend at Disney World.

Mrs. Vega now speaks to other parents of children with OI to let them know that treatments are available. She’s extremely grateful for the care her son received at HSS.  “Dr. Green is not just a doctor, he’s a person with heart. He treated my son as more than a patient, he treated him as if he were part of his family.”

Dr. Green says Ismael has an excellent prognosis. The Vegas have taken him to Disney World since the operation. “I broke down in tears when I saw him walking and going on rides in Orlando, I was so happy,” Mrs. Vega said. During their first trip, Ismael experienced Disney World in a stroller and in the arms of his parents. “Before the surgery, I never thought I’d see him walk,” she said.

Always an advocate for her child, Mrs. Vega also wants to help others and is very happy to be able to share her son’s story with lawmakers during her upcoming trip. “My hope for the future is to discover a cure and to let people know there’s a lot of hope for kids with OI.”