Advances in implant design make procedure a viable option for many

Arthritis can cause terrible pain, making activities of daily living difficult, if not impossible. While most people are familiar with knee and hip replacement surgery for debilitating arthritis in these joints, ankle replacement is another procedure that’s on the rise for people suffering from severe ankle pain. 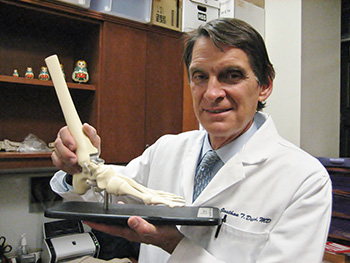 Although ankle fusion traditionally has been the standard treatment, improvements in implant design have prompted more orthopedic surgeons and their patients to consider ankle replacement to relieve pain and restore function, according to Jonathan Deland, MD, co-chief of the Foot and Ankle Service at Hospital for Special Surgery in New York City.

"In ankle replacement, we replace the damaged surfaces of the ankle joint with an artificial implant," explained Dr. Deland. "One of main the advantages of ankle replacement is that it provides patients with better movement and mobility compared to ankle fusion, in which bones in the ankle are fused together using metal screws."

In addition, ankle stiffness resulting from fusion puts stress on other joints in the foot, leaving an individual more susceptible to arthritis in those joints.

The newest implant used in ankle replacement, which Dr. Deland helped design with other doctors, is considered by many to be an advance over previous models. "It is designed to better reproduce the ankle's natural motion. It is also designed to be longer lasting. It has the proper curvatures like a normal ankle," he explains.

The new implant was good news for 61 year-old David Sander, who suffered a broken ankle 30 years ago and later developed severe arthritis. The Asbury Park, New Jersey resident said he put up with the pain for years because he wanted to avoid ankle fusion and was not convinced the ankle implants available at the time would allow him to return to activities he had abandoned because of the arthritis.

When Dr. Deland told him about the new implant, which was approved by the FDA in 2012, Mr. Sander opted for ankle replacement surgery with the new prosthesis. "Before the surgery, I could barely walk. I was in constant pain," he said. "After ankle replacement, I got my life back. The pain is gone. I go bike riding, walk on the Boardwalk, I go camping and hiking in the woods. Everything that had been taken away from me has been given back."

Mr. Sander says his ankle now feels normal and he even forgets he has an implant. Components of the prosthesis work together to restore the natural movement of the ankle joint, according to Dr. Deland.

The surgical technique used with the new prosthesis entails an incision on the side of the ankle, as opposed to one in the front used for traditional implants. "The side incision will generally cause less disruption to the soft tissues surrounding the ankle joint and allows for the replication of curved bone surfaces like those in a normal ankle," he says.

Candidates for ankle replacement are people with severe pain for whom conservative treatments, such as rest, pain medication and bracing fail to provide relief. Eligible patients are at least 50 years old, they must have good bone quality and foot alignment, and they cannot have any underlying health problems that would impede healing, according to Dr. Deland.

When considering ankle replacement, Dr. Deland stresses the importance of choosing an orthopedic surgeon with significant experience. "No surgeon should do only one or two of these procedures per year – they'll get into trouble mighty fast," he says. "You have to know about foot alignment, and you have to know the implant. Studies show a steep learning curve when performing total ankle replacements."

The surgery is covered by Medicare and most insurance companies.