Dr. Alexa Adams, a pediatric rheumatologist at Hospital for Special Surgery, says she is just doing her job. But Queens mom Theresa Tineo says Dr. Adams goes above and beyond.

Tineo nominated Dr. Adams for special recognition by the Arthritis Foundation, and she was chosen to receive the “My Doc Rocks!” honor.  It’s a way for the foundation to help people honor the relationship they’ve built with their doctor, according to the organization.

Tineo’s daughter Juliana, who turns four on Halloween, has juvenile arthritis. “Dr. Adams has not only provided outstanding medical care; she treats my daughter as if she were a member of her own family,” she says.

Little Juliana presented Dr. Adams with a “My Doc Rocks” plaque at a ceremony at Hospital for Special Surgery in Manhattan on Sept. 19. The plaque recognizes Dr. Adams as “an outstanding medical professional who values her relationship with her patients.” 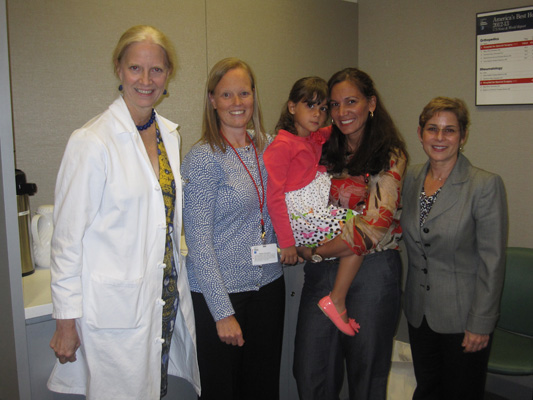 “I was incredibly honored and grateful to the family for this recognition,” Dr. Adams said. “I think it’s crucial to put the child and the family at ease so that they’ll call you with any concerns they may have.”

Studies show that finding the right doctor can make a world of difference in how a patient fares, especially when managing a chronic illness that can be controlled, but not cured. Good communication skills, empathy and compassion, often referred to as “bedside manner” are important traits.  In addition to possessing these qualities, Tineo says Dr. Adams constantly monitors her daughter’s treatment and progress, and is truly happy when Juliana does well.

“The diagnosis of juvenile arthritis when Juliana was just one and a half was overwhelming, but Dr. Adams has made it so much easier to deal with,” Tineo explained. “The bond that she formed with my daughter is amazing. So much so that my Juliana now says ‘I want to be a doctor like Dr. Adams when I grow up.’”

Juvenile arthritis is an umbrella term that refers to a number of autoimmune and inflammatory conditions that can develop in children ages 16 and younger. It causes pain and swelling in the child’s knees and other joints.

“Dr. Adams is exceptional in returning phone calls within 15 minutes even when I’ve called way after hours to ask a question,” Tineo said. “She has contacted my daughter’s pediatrician and formed a relationship with him to allow the pediatrician a better understanding of Juliana’s disease. She also sends progress reports to Juli’s pediatrician so that her file is accurately updated.”

When nominating her child’s physician for the “My Doc Rocks!” award, Tineo wrote: “I am forever grateful to Dr. Adams for the progress my daughter has had.  There have been times when she could barely walk, and during those days, it was Dr. Adams who would take time out of her personal schedule to check on her, see her, and make sure that she was receiving the proper dosage of medicine or treatments to make her better.”

Juliana is now doing well and plans to go trick-or-treating on her birthday. She’ll also receive an honor of her own in December. The Arthritis Foundation has chosen Juliana as an honoree at the organization’s Jingle Bell Run/Walk for Arthritis at Riverside Park in Manhattan on December 1.